Vaping in Class: An Illegal Trend 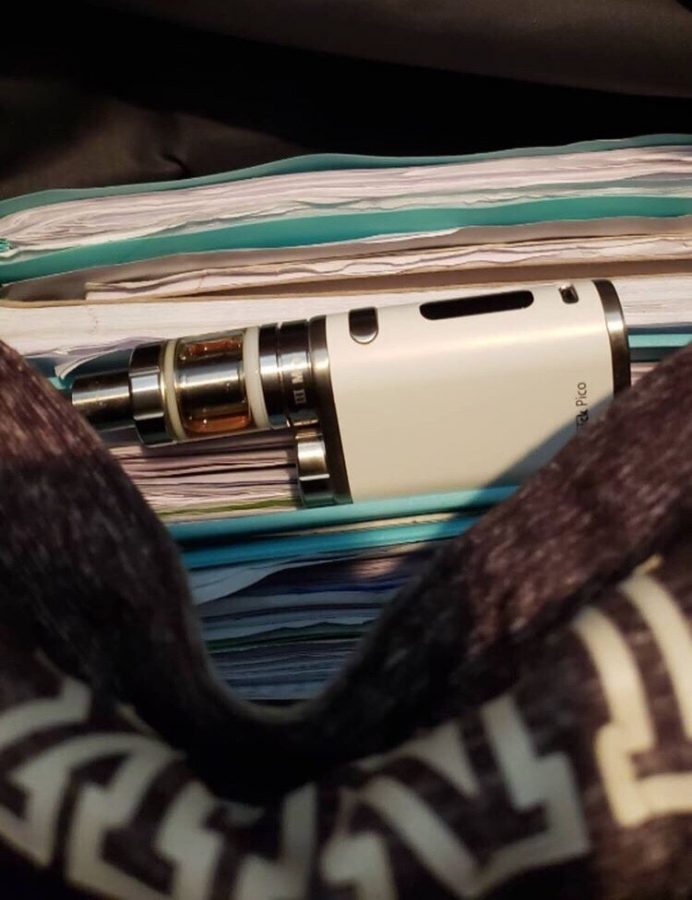 Photo of a vape mod taken on campus.

The trend of vaping, or Juuling, is sweeping across the nation, becoming especially prevalent in teenagers. Whether seeing a Juul or smelling the fruity aftermath, it’s rare to go a full day in high school without some type of an encounter with a Juul, vape, or other forms of an e-cigarette. The bathroom, humorously nicknamed “the Juul room” is a hub for illegal activity. Kids slip in the bathroom in between classes to get two or three “hits”, leaving a telling scent in the air.

In recent years, students have grown more and more bold when it comes to vaping on school grounds. Two years ago I can only recall one incident in which I saw someone vaping in class. Now, with the smaller and more inconspicuous Juuls, students can easily hide their activities. In the last week alone, I have witnessed at least five incidents of vaping on campus. And that’s not to mention the plethora of students, primarily underclassmen, who take their Juuls onto the bus and not so subtly conceal the vapor by blowing it under the seat. This can likely be said for all the buses in the CCCHS school system.

Getting caught with a Juul or vape can result in serious consequences, especially if the perpetrator is a minor. It is illegal for them to own a tobacco product at all, even if the substance is vaporized. On the other hand, it is perfectly legal in the state of Tennessee for anyone eighteen or older to own an e-cigarette. However, it is still strictly against school policy for anyone to have one on campus. Eighteen year-old students are subject to in-school detention while those seventeen and below will be sent to court for their illegal actions.

What students don’t realize is that, in addition to the legal consequences, there are physical consequences to vaping. One Juul cartridge has more nicotine in it than an entire pack of cigarettes. Vaping, Juuling, and other e-cigarettes are typically seen as the safer alternative to actual smoking. And while that may be true, e-cigarettes are intended to stop nicotine addictions, not start them. Most high school students who vape did not previously have an addiction to nicotine and have developed one as a result of this reckless trend.

In a survey conducted for this article, of 50 high school students, a staggering 94% have personally witnessed vaping in class, on the bus, or anywhere else on school grounds. Essentially, nine out of ten students can say they have seen someone vaping at school. This goes to show how commonplace vaping has become in our age group. The stigma behind vaping is much less severe than the stigma behind smoking cigarettes, so much so that students don’t even bat an eye when seeing illegal activity taking place on campus—even I myself am guilty of this.

The evidence from the survey has proven that students are acutely aware of others vaping or Juuling on school grounds, but this is not the case with faculty and staff. One teacher, when told the results of the survey, was shocked to hear that nearly every student had seen somebody vaping in school and exclaimed that if he or she ever saw a student vaping in class, that student would be sent straight to the office. Another teacher was aware students do vape in class, but never explicitly sees it, and it is difficult to catch students at the right moment. This is because the students who vape only attempt to hide from the teachers, but they make little effort to obscure themselves from other students’ view because they know most will not report them. 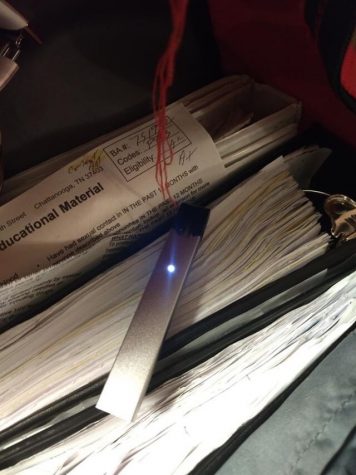 Photo of a Juul brought into the classroom by a student.

Common methods of remaining covert include blowing vapor into a backpack, a coat sleeve, under the bus seats, or even blowing the vapor straight into the air because teachers are busy or not paying attention. Locker rooms are the most appealing locations to students who vape. The P.E. teachers rarely enter those rooms.

I spoke with students who have vaped and asked them first if they vaped at school and, second, why they felt compelled to do so. One replied “At first I tried to just keep it at home but as time went by, I would think ‘Man, it would be nice to take a hit right now.’” Another stated that he gets headaches and nicotine withdrawals when going without vaping for an entire school day. It is addiction, plain and simple. However, another student replied that he did not vape at school, scoffing at the idea and calling it stupid and reckless. Surprisingly, the general attitude the students had towards vaping was laid back; they had no problem openly discussing vaping when asked.

Overall, the prevalence of vaping in high schools has taken a drastic upwards turn. Schools have not quite learned how to adequately prevent vaping in school because they are struggling to catch up with the trend.