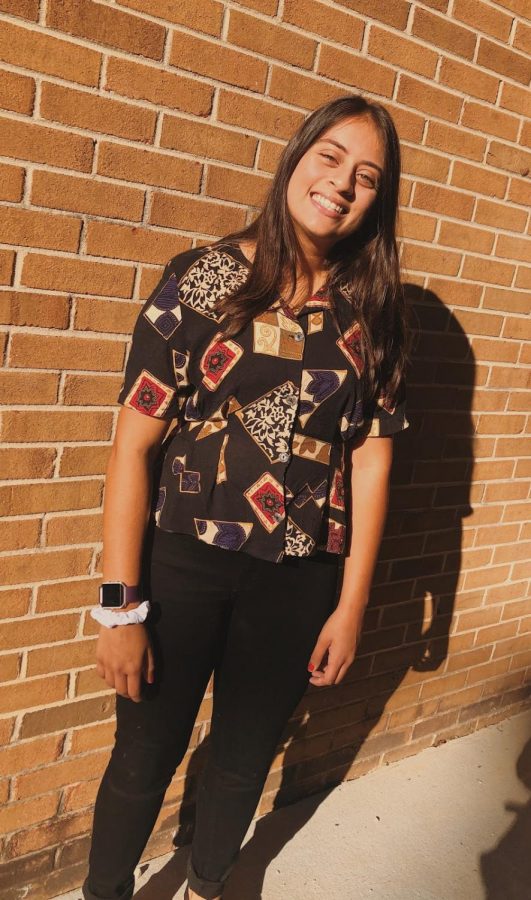 Kushi Zaver wears her upcycled shirt that was originally an old dress.

Teens take to local thrift shops everywhere to save money while still keeping up with today’s trends and reaping all the individual and environmental benefits second hand purchases offer.

It’s 2019 and everyone wants to be unique. Identity plays a big role in style choices, and it is hard to always keep up with the ever changing fashion trends while staying true to your individualism. Whoever said that having a unique style had to be expensive clearly had never been thrift shopping.

Thrift shopping or “thrifting” has gradually become a craze that everyone, especially teenagers, is trying out. Knowing the benefits of where, how, and why to thrift can help both your pocket and your environmental footprint.

Teens eventually reach the age of developing their own style and the responsibility of buying for their own wardrobes. For many, this can often be hard because trending style choices are not always the cheapest.

One of the most common reasons teens are trying out thrifting is that it is an inexpensive alternative. After conducting a recent Instagram poll asking “Why do you thrift?”, 20 percent of people said they thrifted because it was cheap, 12 percent because of unique finds, and 68 percent voted for both cheap and unique.

Instead of putting a dent in your pocket from buying new name brand clothing items, think about the cost benefit you’d receive from purchasing gently used items. Popular brands of varying expense rates can be found on occasions.

Some popular brands you may find while thrifting include: North Face, Under Armor, L. L. Bean, American Eagle, Champion, Hollister and the list goes on. Teens are often able to find hidden treasures among others’ trash. Jake Melton (18) made one such find when he discovered an “American Eagle denim jacket that was originally $75 for $5.”

One of which was by Jake Melton who said he found an “American Eagle denim jacket that was originally $75 for $5.”

Although, not every trip to the local thrift store is going to be successful. Sometimes it’s hit or miss and that’s just the luck of the game. You might find several pieces one day and nothing the next.

Another benefit of thrift shopping is the environmental impact.

Second hand purchases benefit the environment by reducing waste and pollution. When clothes are bought through thrifting, items are less likely to end up in landfills.

A part of thrifting some teens are participating in is “upcycling.” This is where items are bought at a thrift store and then reused by changing them into something new.

Not all items at a thrift store are “trendy” at first glance, but by modifying items, clothes are being given new life and purpose.

Kushi Zaver explains why she chooses to upcycle pieces, “I upcycle because it’s good for the environment and I see things that have the potential to be great pieces of clothing with a little bit of work.”

Teens can benefit not only themselves but their world by giving clothes a second life.