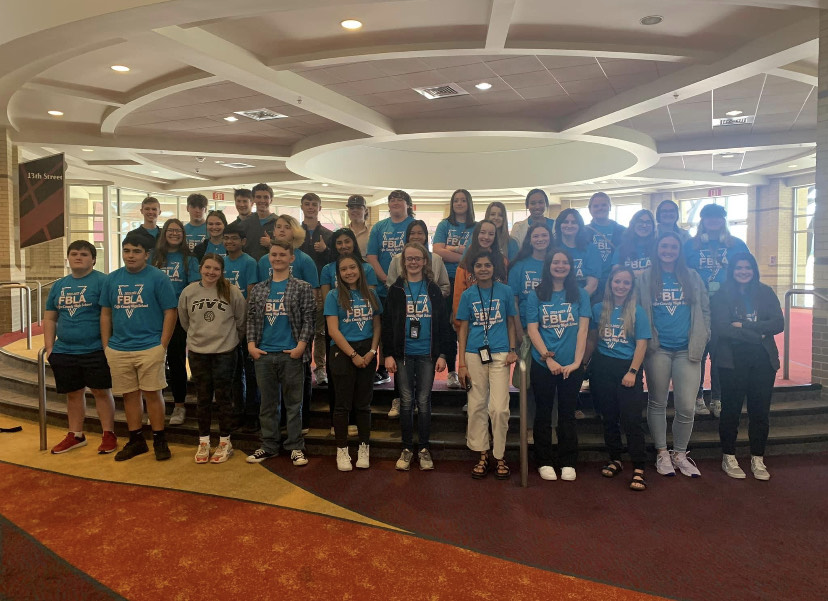 CCCHS FBLA poses for a group picture before taking on the busy week of competitions and conferences!

Looking back on his time in FBLA, state treasurer Connor Fox states, “FBLA has given me countless opportunities to connect with others and has allowed me to grow in my public speaking skills. Our FBLA chapter has a lot of eager participation because of the many opportunities this organization has to offer.”

At the state convention, students competed in multiple business-related competitions against other high schools from across the state. Examples of these competitions include broadcast journalism, public speaking, accounting, and business ethics.

Among those who placed top five in the state was CCCHS senior and FBLA State President Elizabeth Brown.

Brown served as state treasurer for the 2020-2021 term and president for the 2021-2022 term. She placed first in the state in both the community service project and public service announcement competitions.

Brown said her official goodbye to Tennessee FBLA at the closing session ceremony on Wednesday. Junior student Kaitlyn Clark campaigned as FBLA State Vice-President where she followed in Brown’s footsteps to success.

Clark’s catchy slogan, “Be great, vote for Kate” rang true as she secured the role of vice president. “I wanted to be a bigger part of FBLA. The last two officers were from my local chapter and they really inspired me to take on this role.”

When asked how she feels about leaving FBLA, Brown stated, ”It’s definitely bittersweet but it has yet to hit me that I am leaving for good. Looking back, all the opportunities this organization has given me have been like no other.”

Brown continues, ”I am optimistic for the future of FBLA because I know Kaityln will work hard to achieve a successful term as vice president.”

Those who qualified will be traveling to Chicago, Ill. this June to compete at the national FBLA conference.